Luxembourg uses SeaSafe, an advanced vessel screening software, to strengthen regulatory oversight of its fleet and mitigate PSC detention risks, at no extra cost to Owners and Operators. This proactive approach helps ensure Luxembourg-flagged vessels are properly prepared for their upcoming port calls and increases the likelihood of a positive outcome in the event of a PSC inspection.

Where SeaSafe identifies a high PSC inspection probability at the next port of call, the Luxembourg Maritime Administration initiates contact with the vessel DPA to determine whether any action is required prior to port arrival, including:

Owners may also request the attendance of a Flag State Inspector at any time on short notice.

The FSI program covers all ships registered in the Luxembourg Ship Registry. The inspection scope includes certificate and document control, followed by a systematic sampling of the ship’s general condition, safety management and security systems, work on board, emergency preparedness, pollution prevention measures and crew accommodation.

Luxembourg boasts a network of 400+ flag state inspectors in ports around the world. Inspections can be scheduled at a convenient time and location, significantly mitigating any inspector travel costs.

The Paris MoU uses a risk-based inspection methodology to identify ships due for inspection. Ship-specific risk profiles determine inspection priority, intervals and scope. Several parameters, including the ship’s flag, are assessed daily to designate a vessel as high, standard or low risk.

The Paris MoU publishes an annual flag State performance document (Black, Grey and Whited flags), based on the inspection and detention history over the preceding three calendar years. Luxembourg ships are considered LRS for Paris MoU flag state parameters. The Luxembourg fleet boasts one of the lowest detention rates and deficiency ratios among EU Member States. 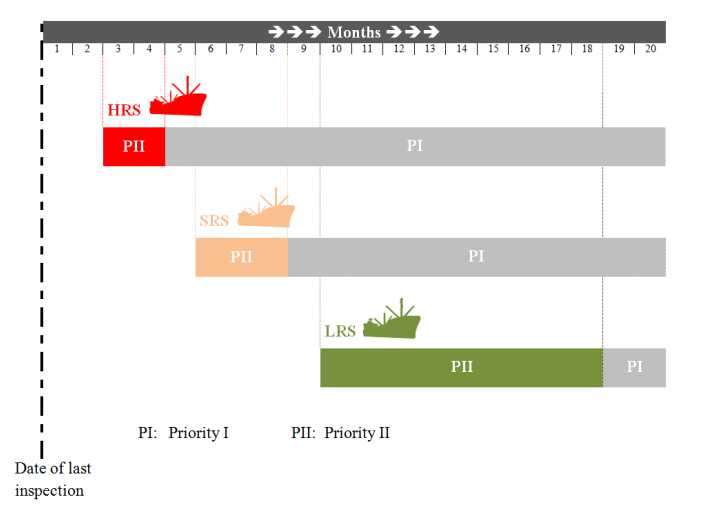 The USCG targets poor-quality vessels and rewards owners and operators of high-quality ships through its Qualship 21 Program.

Since 2011, the USCG has maintained a list of Flag Administrations that have demonstrated a commitment to excellence in their level of compliance with international standards but do not meet the full requirements for Qualship 21 eligibility.

Luxembourg’s commitment to excellence has been recognized by the USCG with no ship detentions in the previous three years.

The Master must receive a copy of the PSC inspection report from PSC authorities and promptly communicate it to the Luxembourg Administration.

Deficiencies identified in the PSC inspection report must be rectified according to PSC requirements:

In case of serious deficiencies, the Port State Control Officer (PSCO) may decide to detain a ship until their rectification. A notice of detention is issued to the Master, the Flag State Administration and the Classification Society. The Master should promptly notify the Luxembourg Administration of the detention. Once satisfied with the corrective actions, the Master can apply to the PSC for re-inspection.

Detentions may be appealed by the Master or Company.